Behavior Trees are a common mathematical model of execution order or plan when writing for Artificial Intelligence most commonly in Games and Robotics. It is used in place of the Finite State Machine but has a some benefits over the FSM. The most important one is that it has the capability to be expanded into a big complex system. In Finite State Machine pattern, you have a finite pre-defined states and all the AI does is switch between these states. This will work well for AI which requires only a few states and nothing too complex has to be performed. But, lets say you want to write an AI that might have many tasks to perform, and you need to make multiple decisions, check for multiple situations or perform sequence of actions, then Behavior Trees are your friend.

In this post I will talk about Behavior Trees in general and then show you an example in Godot.

In Godot, you can implement your own Behavior Tree Pattern with custom code, or you can use someone else’s implementation of the Behavior Tree in the Asset Library. 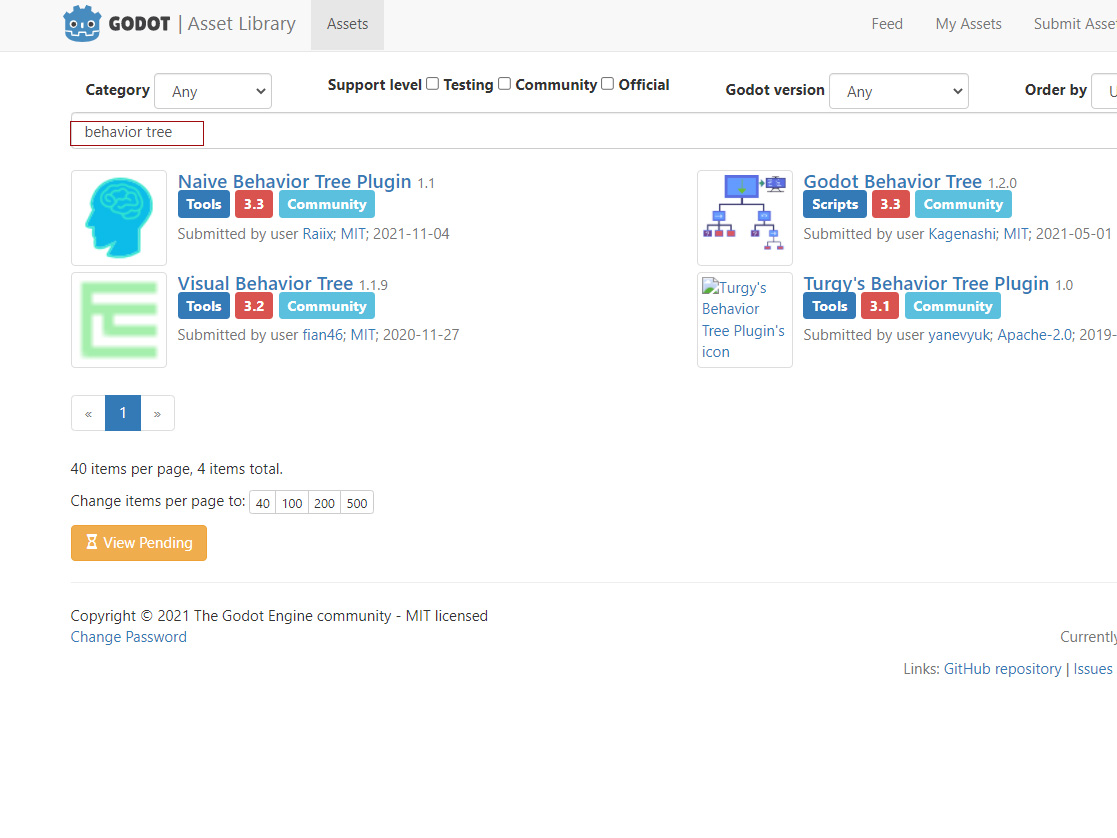 For this article, I will be using Vinicius Gerevini’s implementation available here. 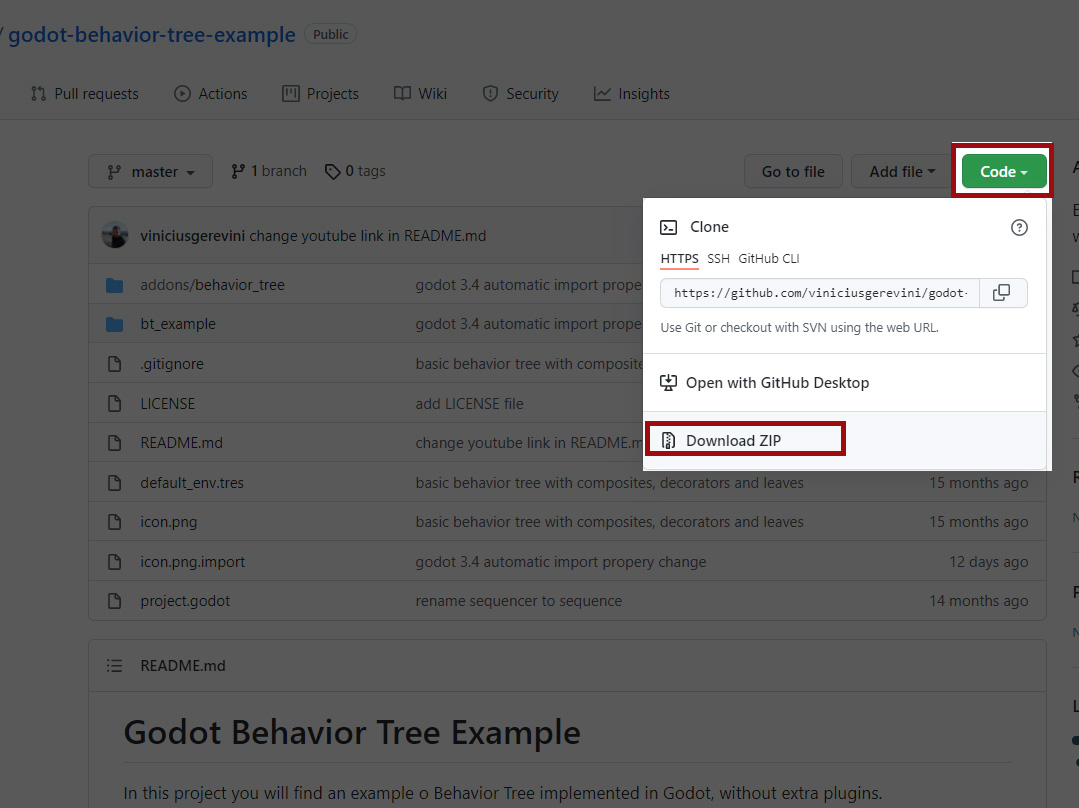 Download the zip and copy the addons folder to your own project folder. 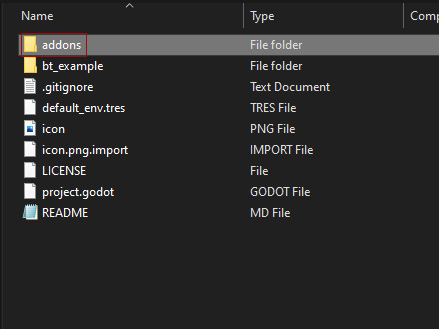 Then go to the Godot menu > Project > Project Settings and in the Plugins Tab, locate the Behavior Tree Plugin and enable it. 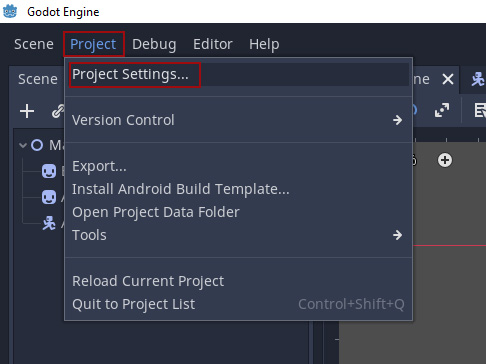 Once Enabled you will be able to find and use the Behavior Tree Nodes to any scene in this project. 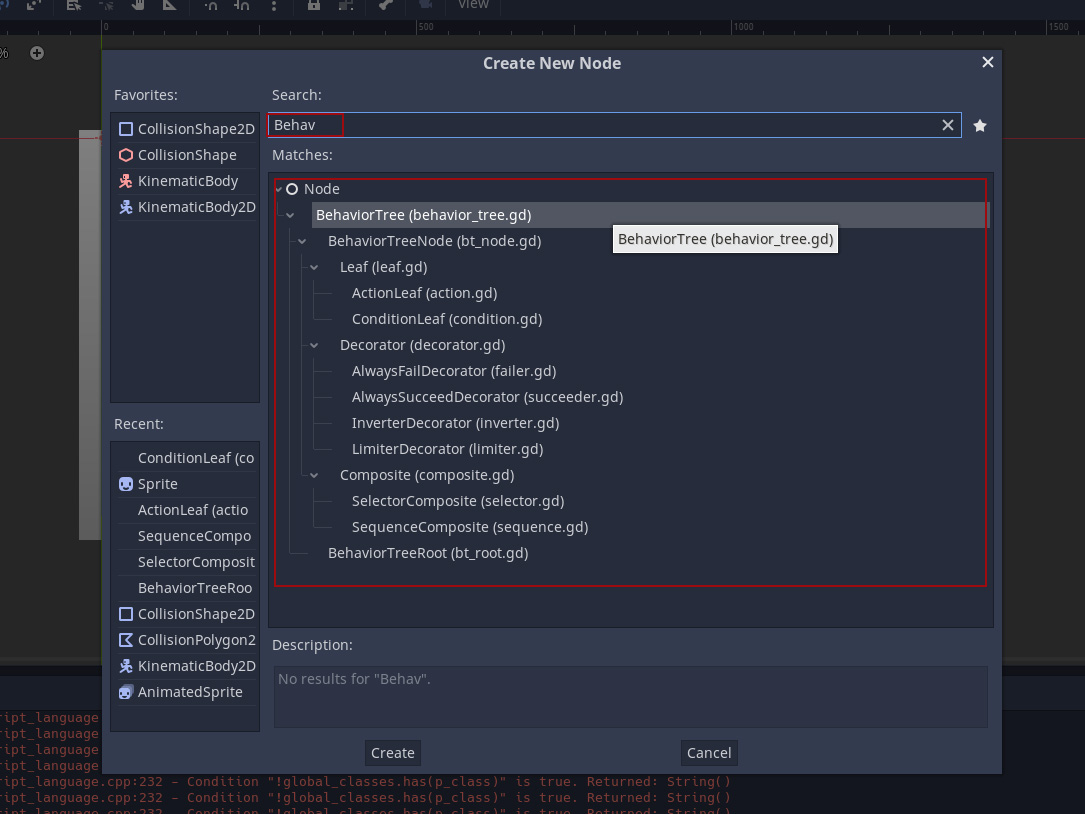 Now once we are all set to experiment with our Behavior Tree Nodes in Godot, we can work on the very basic example. But, before we do that, let’s try and understand how behavior trees work.

Behavior Trees: How they work?

The Behavior Trees have a tree like structure as the name suggests, each child node should perform only one task (predefined for composite nodes and custom code for leaf nodes) and should return only one result. Most common results used are:

There can be more result types, but the above 3 are more than enough for most situations.

Now, Let’s look at the different kinds of Nodes in Behavior Trees

Root Node: The Root Node is the Entry point to the Behavior Tree. This is where the processing of the rest of the tree begins. Ideally, you will need only One Behavior Tree per NPC (Non Player Character), but there can be situations, although rare, where you would like to layer your behaviors into different Behavior Trees

Leaf Nodes: These are the nodes which are at the end of any branch and have no more child nodes. This is where you will write your custom code to add behavior to the AI.

In the above diagram, we have one root node [purple], 3 Composite nodes [Orange] and 6 Leaf Nodes [Green]. The behavior tree is processed top to down, from left to right.

For now, the above two composite nodes are enough to understand. There are more composite nodes like Random Sequence, or Random Selector, but I will not be talking about them in detail in this post.

Tick: Each processing cycle is called a tick. Each tick will process the tree one time, with a result of SUCCESS or FAILURE or RUNNING. In game development it is equivalent to _process() or _physics_process() methods in Godot Engine or Update() or FixedUpdate() methods in Unity Engine.
Blackboard: Blackboard is a concept where you can store values which can be used and updated from any node in the tree. This is where you will store certain values you have calculated and instead of recalculating them again and again in each node, you can access that value from any node.

In addition to the Root, Composite and Leaf Nodes, there are Decorator Nodes which can be used to alter the results coming from each Node. At first they might seem redundant or useless, but there will be situations where they come in very handy. Some examples of decorator nodes are:

Most of the times, I have found decorator nodes to be very useful for reusing code. I can use the same generic code in my script files and attach them to different nodes at different places and invert the results, or modify them as per the requirement.

Processing of the Behavior Tree

After this Selector Node process is complete, the next node in line will be processed which in this case is a Sequence Node. The Sequence Node will execute it’s child nodes in order. If any one of the nodes returns a FAILURE, the sequence node will terminate processing and return a FAILURE to it’s parent.

We will start with a 2D Scene and an ant KinematicBody2D Node, in which the Ant character will walk towards the mouse if the mouse is closer than some predefined distance (300 pixels in the case of our example). I will not get into the details of how to make your animated sprite and kinematic body ant in this tutorial, assuming you are familiar with the basics of Godot Engine.

The processing of this behavior tree will start at the root node. Since our requirement for this example is very simple, the root node has only one child. We are only checking for one condition. If the mouse position is in range or not. My custom code in the Condition Node will return SUCCESS if the mouse_position is less 300 pixels away from the ant’s position.

Now every time the mouse is farther than 300 pixels from the ant, the node will return FAILURE, which will be sent to the parent Sequence node. I am using a custom function is_mouse_close() in the Ant_AI.gd script to perform the logic. The sequence node will abort further processing for this tick. But every time the mouse is closer than 300 pixels from the ant character, the condition will return SUCCESS, and the Sequence Node will then process the next child node in queue. I am also setting the value of the mouse position in the blackboard just to show how we can use the blackboard and retrieve or modify the value in any of the nodes.

If the mouse is in range, the next node will make the ant rotate towards the mouse_position. This node is the simplest code and has only one line.

Although in the above example you can simply return SUCCESS, you can also attach an Always Succeed decorator node above it if you like.

After this the next child node will be processed, which is a condition node I will check if the ant is already at the mouse position or not. I am using an invert decorator just to show how the inverter will invert my result.

The condition node will return a SUCCESS every time the ant is at the same position as the mouse. The inverter will invert it and make it FAILURE and when the parent Sequence node receives a FAILURE, it will abort the rest of the processing for this tick.

If on the other hand, if the ant is not at the same position as the mouse, the node will return a FAILURE, which the inverter will invert to SUCCESS, and the Selector node will now process the next child in queue. The next child node is and action node which is going to contain code to move the ant towards the mouse_position.

I can write the whole code of moving the ant in this action node, but it is always advisable to have some level of abstraction in your leaf node code. This is a very simple example, but as we will build more complex AI, you might be moving the character from within multiple action nodes, passing different parameters to affect the movement differently. In the above code, I am also getting "delta" from the blackboard and passing it on to my custom function that handles movement.

I will be writing another post and extending the Behavior Tree to make a little ant simulation. Get the project files and checkout the MouseMove/MouseMoveScene.tscn. Hope this was helpful in understanding Behavior Trees a little bit. Let me know in the comments what you think.

Thanks for Reading!
~Vini

Vinimay Kaul
Vinimay Kaul has more than 25 years of experience in software development. He is co-founder of Arctropics OÜ, Estonia and is currently leading it's Indie Game Development mission. He is also an award winning cinematographer and filmmaker and his photography work is available for sale at GettyImages. He loves playing the Piano, Drums, Guitar, Bamboo Flute and is currently drummer for his band "Burning Season".